This tutorial is for creating a Taylor Diagram using CDAT's VCS package.

Taylor diagrams are mathematical diagrams designed to graphically indicate which of several approximate representations (or models) of a system, process, or phenomenon is most realistic. This diagram, invented by Karl E. Taylor in 1994 (published in 2001), facilitates the comparative assessment of different models - for example, to summarize the relative merits of a collection of different models or to track changes in performance of a single model as it is modified. The diagram can also be used to quantify the degree of correspondence between modeled and observed behavior. In general, the diagram uses three statistics: the Pearson correlation coefficient, the root-mean-square error (RMSE), and the standard deviation. Taylor diagrams have been used widely to evaluate models designed to study climate and other aspects of Earth’s environment. (See Wikipedia's page and Taylor (2001) for details.)

Environment version used in this tutorial:

To download this Jupyter Notebook, right click on the link and choose "Download Linked File As..." or "Save Link as...". Remember where you saved the downloaded file which should have an .ipynb extension. (You'll need to launch the Jupyter notebook or JupyterLab instance from the location where you store the notebook file.)

Plot the initial version using VCS module. "vcs.createtaylordiagram" is for creating the template.

The dotted curved line in the plot indicates a reference line. Let's say your reference data (i.e. your observations) has a standard deviation of 1.2. You may want to move the reference line to cross at 1.2, as shown below.

You may want to distinguish the data points from each other and label them. You can adjust the marker as a shape and/or string, and create a legend.

"id_colors" and "colors" are not required to be identical, but it is a good idea in most cases to use the same color for a given text string and its corresponding symbol.

To adjust the position of text strings to avoid overlapping the symbol, use "xoffset" and "yoffset", which give the relative position from each of the (x, y) points. (The offsets can be positive or negative depending on where you want to position the text string labels.)

An Alternative Way of Setting Makers¶

Instead of using a "for" loop and the "taylor.addMarker" function, you can store those pre-defined values in the Taylor diagram template directly.

For more information on templates, see the VCS Templates Tutorial.

Create a Connecting Line Between Dots¶

If needed, you can draw connecting lines between individual data points. In the example below, the line connects all the data dots in the order they occur in the data.

Let's assume that you want to group your data. You can split a line in two by giving "None" for one of data points.

Instead of the legend at the bottom (the default position), you can move it where you want.

This third example uses the default skill function from the first example, but uses the template defined above to move the legend to the side.

taylor.list() allows you to check all the components that you can control. 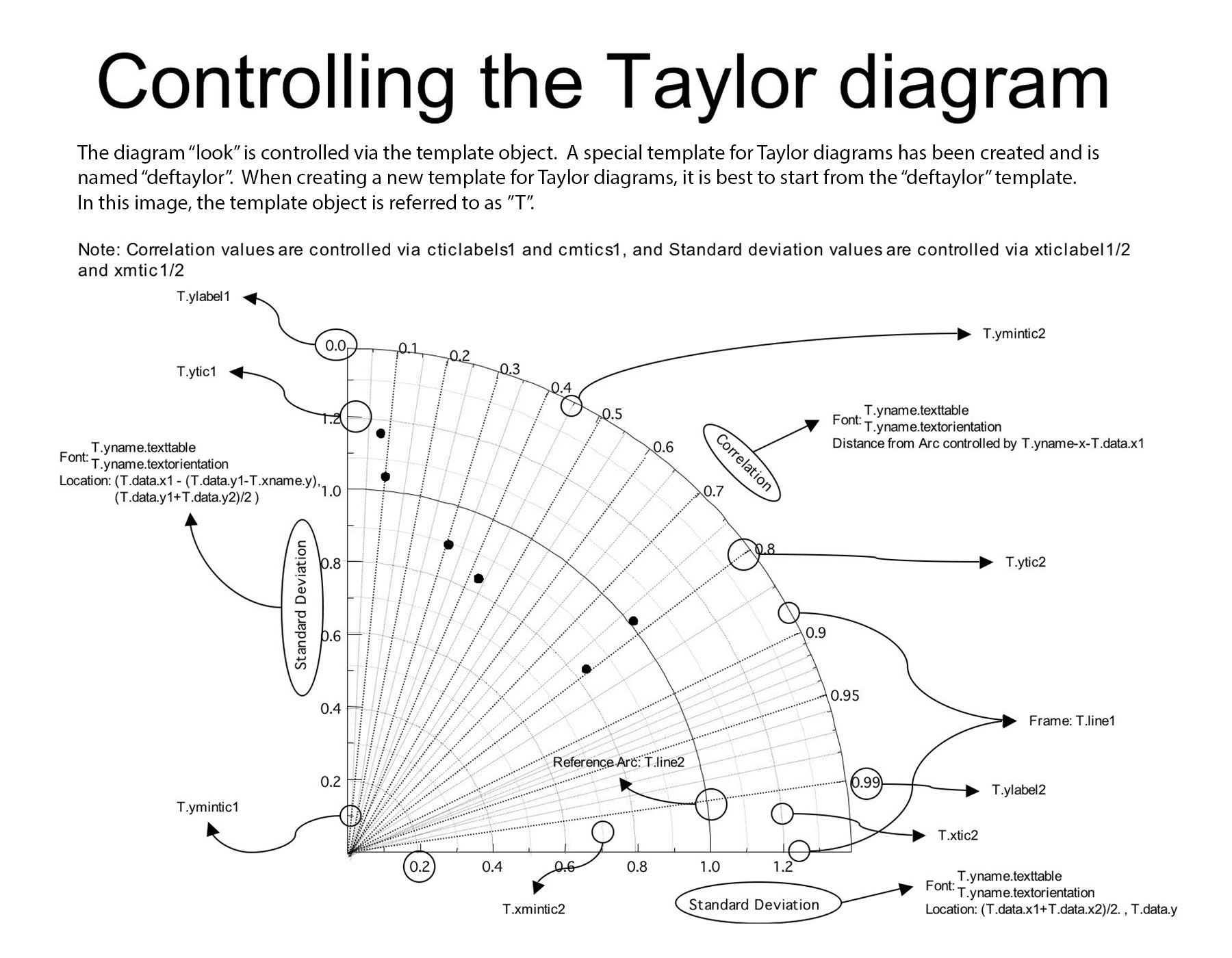 The CDAT software was developed by LLNL. This tutorial was written by Charles Doutriaux and Jiwoo Lee (18 Sep. 2017), with clarifying edits by Holly Davis (30 Sep. 2019). This work was performed under the auspices of the U.S. Department of Energy by Lawrence Livermore National Laboratory under Contract DE-AC52-07NA27344.

If you have questions about this notebook, please email our CDAT Support address, cdat-support@llnl.gov.